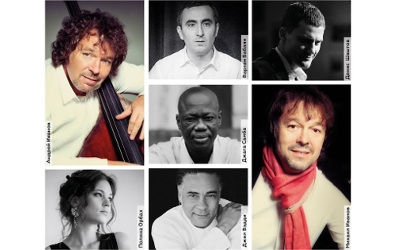 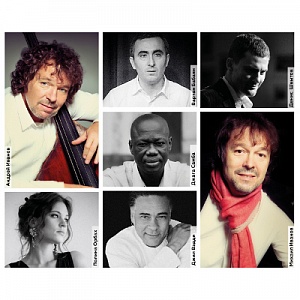 "Crossing Time" is an interactive music social and cultural project of Moscow Region Philharmonic, the organization currently undergoing restoration. The festival combines various philharmonic genres, from classical and folk music to jazz. The idea of the festival is to show the connection between times and spiritual continuity of generations through musical images of different ages. World-class musicians presented their programs to the audiences of Moscow region from a new perspective and shared professional skills with aspiring musicians.

The alliance of the brilliant improvising musicians Mikhail and Andrey Ivanov, soloists of Moscow Region Philharmonic, formed the artistic core of the festival.

The performance of Afro-American singer Gyle Waddy became one of the high points of the festival. His education opened him up to different facets – singer, actor, choreographer, poet, showman, and composer. He wrote over 700 songs, and a lot of them have been recorded by such names as Peter Mann, Timmy Thomas, George McCrea, Laura Fabian, and others. He played in the film "The Wiz" with Diana Ross and Mikhail Jackson and "Busting" with Charles Bronson. His repertoire features popular jazz standards and works in the genre of soul, fusion, jazz rock, sympho house, and disco, as well as his own works. When performing, Waddy puts on a real show.

In the evening a sophisticated program of traditional jazz and music by different authors was presented at the atmospheric Art Likor picture gallery.

The festival closed on 8 December with a workshop concert titled "How Music Is Born" at the musical college of Pushkino town.

Soloists featured in the festival:

Brothers Andrew (contrabass) and Mikhail (piano) Ivanov – an alliance of two outstanding musicians, winners of Grand Prix at EuroJazzContest in Brussels, Honored artists of Russia, winners of Moscow City Government Art and Literature Award (2010), winners of Russian Government Culture Award (2013), well-known in this country and beyond. Sticking to the genre of symphojazz, they work successfully on developing this genre in Moscow and throughout the country. Their personal subscription series at Moscow State Academic Philharmonic "Symphojazz of Ivanov Brothers" is one of the most attended concerts in the capital and has its own audience.

Alexander Ghindin is Honored artist of Russia, artistic director of "Instrumental Capella" and "Hermitage" ensemble of soloists.
Alexander Ghindin is an acclaimed highly gifted contemporary pianist. He was born in Moscow in 1977. At 17 before entering the Conservatory Ghindin had become the youngest award winner of the International Tchaikovsky Competition in Moscow and one of the most sought-after pianists of his generation.
In 1999 he won the 2nd Award at the International Piano Competition named after Queen Elizabeth in Brussels. This success started off his intensive concert activity as pianist. Ghindin became the winner of the 2007 Cleveland International Piano Competition (USA) and got booked for 50 concerts in the USA. According to the critics he "has made a stunning impression, revealing authoritative artistry that renders every performance a special event" (Art and Life).
In July 2010 Alexander Ghindin became the winner of the International Piano Competition of Santa-Catarina state (Florianopolis, Brazil). In 2001 Ondine records released the world premiere of the original version of Rakhmaninoff's concerts performed by Alexander Ghindin with Helsinki Philharmonic Orchestra led by Vladimir Ashkenazy.

Polina Orbakh is a budding star of Russian jazz. Recently she has been working in different musical genres, from traditional jazz to lounge project with her own pieces. She performs at the closing concert of the famous Crescendo festival of Denis Matsuyev and works on an album with the outstanding music arranger Igor Starikov. Her new album NEW JAZZ FLAVOUR will be released on SONY MUSIC soon.

Vartan Babayan is a well-known percussionist with a degree from Gnesin Academy of Music (drums). Participated in Shoo, King Biscuit Blues Quintet, Anatoly Gerasimov Band, Anton Gorbunov's quintet etc.
He was featured in the latest album of Irina Bogushevskaya. Performs his own pieces with VB quintet, which he created at the beginning of 2009.

Jaga Samba (Senegal) is a professional musician and representative of Western African musical culture where Djembe originated from. Jaga has been playing drums since early childhood. He got his first musical degree from National Arts School in Senegal where he studied saxophone. Afterwards he went on to study in Russia at Gnesin Music Institute in Moscow. Currently he's focused on developing African music in Russia. Jaga participates as percussionist in Afrikanda band featuring songs and dances of different African peoples. For seven years Serigne Jaga Samba has been helping his students understand and feel the vibe of African music. His first name, Serigne, means "Teacher".